Music Performances By
Empire Of The Sun, Modest Mouse, Phantogram, Cold War Kids,
What So Not, Rusko, Feed Me, Bro Safari & More

Gear up for the must-see event of the year happening this fall, Alt 98.7 Presents Big Adventure — a brand-new music, comedy, cosplay, gaming, sci-fi, fantasy, and comic con festival, coming to the OC Fair & Event Center in Costa Mesa, CA on Saturday, November 3 and Sunday, November 4. Serving as a celebration of pop culture and fandom of all sorts, Alt 98.7 Presents Big Adventure is a one-of-a-kind entertainment experience, set to immerse attendees in a world where comics, sci-fi, fantasy, and gaming collide with music and comedy. 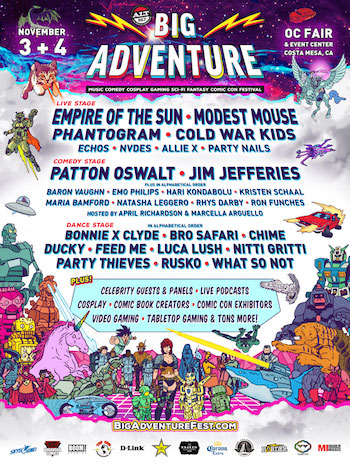 During the day, attendees will have the opportunity to see some of their favorite cast members and special guests during the TV, Film, Gaming, and Comic Book panels, participate in interactive fan experiences, VR, laser tag, table top and video gaming, and tech demos, and visit the artist alley where some of the comic book industry’s top artists and creators will be speaking about their craft, selling artwork, meeting fans and signing autographs. In the evening, the focus will shift to live performances, when fans will witness sets from acclaimed comedians including Patton Oswalt and Jim Jefferies, along with some of today’s top alternative and dance music artists including Empire Of The Sun, Modest Mouse, Phantogram, Cold War Kids, What So Not, Rusko, and many more, spread across three entertainment stages.

“More than just a comic con, more than just a festival, Big Adventure really is a one-of-a-kind celebration of pop culture and fandom in all forms,” says Big Adventure co-producer Rob Tweedie. “I’ve waited in my fair share of comic con lines over the years, sometimes even overnight. I love the tangible, face-to-face fan experience and the freedom to be yourself that the cons offer. Our goal is to combine that great sense of wonder and community with the excitement and energy of an outdoor festival to create an authentic entertainment event that is truly unique and out-of-this-world. Big Adventure has been a passion project for us at SGE for a while and we’re buzzing with excitement to see it come to life with all of you.”

The performance lineup for Alt 98.7 Presents Big Adventure is as follows (subject to change):

A limited number of Alt 98.7 pre-sale tickets for Alt 98.7 Presents Big Adventure will be available on Thursday, July 12 at 10:00 a.m. PT. Visit www.ALT987.com for more information and how to obtain presale passwords. 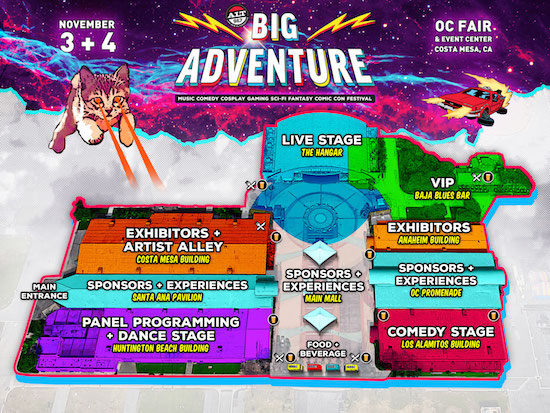 ALT 98.7 is owned and operated by iHeartMedia Los Angeles. iHeartMedia Los Angeles owns and operates KRRL-FM, KYSR-FM, KIIS-FM, KOST-FM, KBIG-FM, KLAC-AM, KFI-AM, KEIB-AM and is part of iHeartMedia. With over a quarter of a billion monthly listeners in the U.S. and over 129 million social followers, iHeartMedia has the largest national reach of any radio or television outlet in America. As the leading media company in the U.S., iHeartMedia serves over 150 local markets through 849 owned radio stations, and the company’s radio stations and content can be heard on AM/FM, on satellite, at iHeartRadio.com, on the company’s station websites and on iHeartRadio, iHeartMedia’s digital music, podcast, on demand and live streaming radio service, available on over 250 platforms and 2000 devices, including on digital auto dashes, tablets, wearables and smartphones, on virtual assistants, smart speakers, TVs and gaming consoles.

iHeartRadio offers users thousands of live radio stations, personalized custom artist stations created by just one song or seed artist, on demand features and the top podcasts and personalities. The all-in-one digital service has more than 1.7 billion downloads, 110 million registered users and is the No. 1 commercial radio podcaster in the U.S.